Gavin HughesPhoto Uploader7個月之前
For Adelaide, SIA has been the longest serving international carrier, an unbroken service from about 1984 until the coronavirus pandemic closed our borders. Before shutdown, they were daily and twice daily over summer using A359s.

SIA is back but only once weekly with a small number of passengers, supposedly Australian citizens being repatriated, plus a once weekly cargo flight, the latter still using passenger A359s.
Report 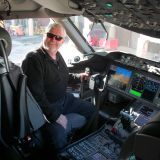 Sandi Jones7個月之前
Love all of your photos from this era! You can never upload too many.
Report

Gavin HughesPhoto Uploader7個月之前
Thank you Sandi. [Be careful what you wish for :)]
Report

Mike Curtis7個月之前
The picture is a reminder of this great bird, long may she live in our memories. I flew in the first one way back in 1989
( I think) Pan Am , New York ...LHR. l flew on most of the other versions up to 1995, I still think it is a wonderful airplane..
Mike.
Report

Third time was on a Condor 747 in 1975. The plane lost two engines crossing the Atlantic and we did an emergency landing at ORD.

I worked as a U.S. Customs Inspector at LAX from 1988 until 2002. I remember the 747's so well, as they were what most major international carriers utilized for their long haul operations. I flew LAX to Frankfurt and return on Lufthansa numerous times during that period. They were by far - from a passenger viewpoint - my favorite aircraft. At LAX Customs Inspectors always liked boarding the 747's after the passengers offloaded for an aircraft inspection. I performed 100's of these. I also did numerous "boardings" on 747 freighter aircraft.