39 Years Of The Beechcraft 1900: The Aircraft’s History

提交時間：4個月之前
Earlier this week, US manufacturer Beechcraft celebrated 39 years since the maiden voyage of its 1900 family. This twin-turboprop design has served various purposes over the years, with its bread and butter work being as a regional airliner. Let’s take a look back at the history of this versatile plane, of which there have been several different variants. (simpleflying.com) 更多...

Cleffer 4個月之前 4
American flew a Beechcraft between Yuma and Sky Harbor back in the late 80's/90's until it was replaced by a Dash (8 I think?). The Beech was ok, but the Dash was NOTICEABLY superior.
回覆 ↓•永久連接•Report 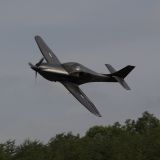 sparkie624 4個月之前 2
There were some 1900's under 121 operations, USAir had a few of them I believe for a short period of time... It was related to a carrier that they bought out at one point.
回覆 ↓•永久連接•上層•Report

Iskra 4個月之前 1
I do not believe that to be correct. As far as I know, you can not use an airplane certified under SFAR part 23 in Part 121 service. I could be wrong, it's been a bunch of years since I dabbled in those regs.

In you case stated above; I believe they operated the 1900's like 121 (with dispatchers) but were still under a 135 certificate.
回覆 ↓•永久連接•上層•Report

Cleffer 4個月之前 2
I swear it was a Beechcraft, like a 1900d but could be wrong. That was many years ago.
回覆 ↓•永久連接•上層•Report

Steve Popilek 4個月之前 2
They didn’t fly under part 121 under USAir they flew under part 135 under a USAir owned company called MESA Airlines. Based on size, weight and cargo capacity they do not qualify for part 121 or part 125 only part 135 for hire/commercial use or part 91 for private use.
回覆 ↓•永久連接•上層•Report

CK N 4個月之前 3
I was hired by FloridaGulf which had D models under UsAir Express. Trying to show off my enormous aeronautical aptitude I asked the CP at the interview "What type of Auto pilot does the 1900 have?" He said "Kid, what do you think we're hiring you for?"

FloridaGulf was bought by Larry Risley at Mesa, and then we had a few old C models with the steam gauges.

We would routinely log 119 flight hours a month under 135, then ALPA made the push for "One Level of Safety" and I thought we flew under 121 mid 1990's and wouldn't get beat up so bad by Crew Scheduling.

It was unnerving to listen to the ice from the props hit the fuselage, and having to wait, wait, wait, to hit the de-ice boots. We would park next to the Shorts 360's as it was the only airplane uglier than the D models. The cockpits were generally very colorfully decorated and I'm quite aware I will never have the stick and rudder skills I had then. Flip side is I can type 90 words a minute now.
回覆 ↓•永久連接•上層•Report

JUAN SANCHEZ 4個月之前 1
If I recall, there was a C and a D model. And it was the D model in particular that was an eye sore!
回覆 ↓•永久連接•上層•Report

bbabis 4個月之前 2
The 1900D always reminded me of paper airplanes that we made as kids. You tossed it and, if it didn't fly right, you bent the ends of the wings up, added a tail or two, tape here and there, and basically did whatever it took to make it fly right. I think that's what Beech did.
回覆 ↓•永久連接•Report

Tim Dyck 4個月之前 1
The 1900C was simply a culvert wth wings that only the smallest passengers could get down the aisle without being all hunched down and almost crawling on your knees. But once in the seat even a big guy like me is comfortable and can sleep through the flight. Very common in northern Canada were there is a runway long enough for them. If the runway is short you gotta ride an Otter with it’s slow moving vehicle sign stuck on the back.
回覆 ↓•永久連接•Report

Rob McCleave 4個月之前 1
Air Canada used them to service the parts of Ontario they didn't really like. Flying in one of those along the edge of Lake Ontario between Kingston and Toronto meant turbulence for the entire 40 minute flight. My kids dubbed it the vomit comet. The Dash 8 was noticeably smoother, but it's a moot point now since we have no service at all.
回覆 ↓•永久連接•Report