Return to Browse Photos
Upload Your Photos
Share This

"Kippie Lee," the classic (and gorgeous) DC-3 in which a wish came true.

Dwight Hartje3 years ago
Gorgeous shot from the front three quarters of the shiny DC3! Great angle and good eye for getting the what looks like a Global 5000 private jet in the background!
Report

Colin Seftel3 years ago
So that's where Virgin Atlantic got the idea for their "Flying Lady" motifs!
Report

STEVEN FIELD3 years ago
GOT MY FIRST TYPE RATING IN THE DC-3. NO FRILL AIRCRAFT BUT FUN TO FLY
Report

George Hall3 years ago
Being a long time DC-3 fan, it appears this DC-3 was a A/A plane at one time. Beautiful as it appears, the nose has been changed and the Flagship name is missing under the cockpit windows even though it's female mascot name is on the fuselage. However, if it is flight worthy, that makes it a real treasure as is the Flagship Detroit in Tulsa.
Report

Gary SchenauerPhoto Uploader3 years ago
Dwight, David S., and David D. >> TYVM for your complis and comments, guys. (Thumbs Up)
Colin and 96flstc >> Thanx for commenting. (Wave)
Steven >> I envy you. I had my very first experience in the front office (well, OK, I was in the jump seat but only a foot or two out of the cockpit) just three weeks ago. It was fabulous! To be a DC-3 pilot must have been wonderful. (Tip of my cap to you)
George >> Hi. Although I can definitely understand how you could believe that "Kippie" was previously an AA fleetbird, she was not. This DC-3 came off the production line in 1945 but the war ended before it went to the military so it never "saw service." Instead, it was immediately bought by a private corporation. It remained a corporate airplane for many years and never wore a commercial airline livery. At one point in time, it was painted in US Coast Guard paint, but it was only for a promotional purpose; it was never a USCG aircraft. It was purchased by a couple, upgrades were made, and that is when it took on the appearance you see here. There was only one difference from what you see in my photo; the name read, "Esther Mae." Just over two years ago, it was sold to another person. That owner, the current one, made only one change in its outer appearance: the name "Esther Mae" was changed to "Kippie Lee." This old gal has never worked commercially; she has been handled with care ever since she was born at Douglas. She's gorgeous on the outside, elegant on the inside, and she sings a propliner lullaby when in the air. (Huge smile and a wave)
Report

Terry Wright3 years ago
Get the polish rags out!
Report 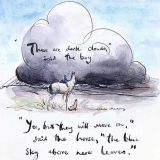