An RVAH-13 RA-5C as Flint River 606 and a VF-114 F-4B as Linfield 204 prepare for an early morning escorted Blue Tree mission from USS Kitty Hawk CVA-63 operating from Yankee Station in the South China Sea February 1967. Picture was made from the 03 aft birthing flight deck access passage way.

Mark King9個月之前
Awesome shot! Thank you for sharing. I also enjoyed the details behind the picture.
Report 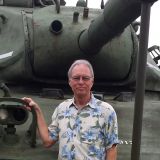 Don FitzgeraldPhoto Uploader9個月之前
Thanks Mark. I found some additional info:

davesheehy大約1個月之前
Every picture tells a story don't it...forget what song those lyrics came from, but the story here is a fantastic historical capture. The lens flare around the cockpit highlighting the pilot getting ready to launch, very well done. Did you ever give him a copy of this? Well done again Don, thank you.
Report